Living with Livestock: A Summer Herding Cattle in the Sawtooth Mountains

As I drove north and east, away from the golden California foothills that are Steinbeck country and into a Martian landscape where places went by names like “Craters of the Moon,” “Atomic City” and the “Sawtooth Mountains,” I wondered what was wrong with me.

I was leaving behind the land, animals and community that I’d poured my life and heart into for the past three years. I was on my way to rough it in the mountains on horseback with 300 head of cattle for three and a half months. “No!” I thumped the steering wheel hard and pressed down the gas pedal. I was confident in my decision. I was leaving to become a better handler to my horse and my dog, a better stockman for the sheep and the cattle that are my charges and a better steward to the rangeland of Paicines Ranch.

I turned off the winding US-93 and drove down the Pashimeroi Valley to Alderspring Ranch. I almost missed the ranch driving in. There’s no sign. Just buck-and-pole fence, some wooden corrals, a mailbox and a sagging Powder River gate. The tent that would be home for the summer snapped in the wind and pulled at its stakes as I moved in.

So far the most profound experiences of my life have arrived innocuously, wrapped in the guise of simplicity and hardship. If I’d known that my two years in the Peace Corps, alone in a West African village, would teach me how to be alone and how to fail I never would have gone. If I had known that I would spend the majority of this summer coping with physical and mental discomfort, the temporary severing of ties to the land and animals back in California would have been even harder.

We trailed the cattle to the allotment and started grazing mid-May at about 5,000 feet. At this point we were close enough to the home ranch down in the valley that it only took an hour drive each way to switch out crews and horses. Stints on the mountain were relatively short: just three to four  days riding with the cattle. But still. We were literally sitting there watching cattle eat from dawn to dusk. I had no idea, aside from sheer determination and stubbornness, how I was going to make it through the summer.

Then, thank goodness, on our third time out, something changed. My stockmanship improved. I could get the cattle to where I needed them to be. It turned from drudgery into a game, and a fun game at that because I was finally winning. Up to that point I had spent many hours feeling like I was going crazy. I had started seeing lines on the beeves’ bodies at their point-of-shoulder and down the center of their backs. I had experimented, riding into the cattle at different angles and watching their responses.

I’ll never forget the moment it clicked. We were grazing around Mitten Camp, rough and rocky terrain of greasewood canyons, sagebrush, prickly pear and bunchgrasses. I was alone at the front of the herd. We were on the side of a hill, trying to keep them up out of a draw below on the grass that hadn’t been grazed yet. I rode against them at an angle to their shoulder. One-by-one they turned up the slope, their bulky bodies defying gravity. It was hypnotic watching them turn with almost mechanical precision.

Part of the story and the land

Another breakthrough moment came on the eighth and final day of our longest stint. All my physical and mental energy was spent. My butt ached. My hair was a solid, itchy mass under my hat. Every time a beeve strayed from the herd and I had to move to go get it I stuffed a meat stick into my mouth for revenge. We were moving camps that day and we kept stopping, watching the horizon and listening for the whinnies of fresh horses signaling that the new crew was on the way to relieve us.

It was after 6:00 pm when our crew boss finally said that we should head for the new camp if we wanted to get there before dark. We were on top of a ridge with a view down the entire valley. High peaks surrounded us in the distance. Ashy cliffs, jags of bare rock and stands of timber stood closer at hand. The hills we’d already grazed spread out below us. I felt a strange mixture of exhaustion and awe. We’re really doing this.

I thought about how we’re primates riding around on a thousand-pound prey animal that we’ve tamed and trained, feeding and living with another prey animal that will eventually feed us. And Kip, my collie, was there, a predator who is the result of generations of ranchers and breeding and who, because I have a relationship with him, respects me enough to move the cattle, following my body position and direction. We were really doing this. We were a part of the story and the land. And in that moment there was nowhere else I would have rather been. I felt honored to be a part of this herd of horses, this pack of dogs, this crew and this land. This work can crush you. But it also provides salvation if you know where to look for it.

I started down this path because I love animals, but I learned fast that if you have livestock then you also have deadstock. You can’t give every animal your heart, otherwise it’ll always be broken. But my horse and my dog have my heart and that keeps me going and brings me joy. As my journey continues, I’ve realized that it’s a privilege to be entrusted with the lives and wellbeing of not only livestock but also the land that sustains them and us. Then to be able to feed and nourish the bodies and souls of the people and communities that I love? I can think of no higher calling.

Jessie Maier is currently a member of the livestock crew at Paicines Ranch, located in the foothills of central California. She spends her days working as a shepherd and cowgirl with her dogs, Kip and Sansa, and her horse, Kal-el. Before that, she spent two years as a Peace Corps sustainable agriculture extension agent in Senegal, West Africa. During her service she focused her outreach on forage crops for local farmers’ livestock. She first learned about Holistic Management and management-intensive grazing as an undergraduate in agriculture at Ohio State University, and has sought opportunities to practice those principles ever since. You can follow her life and work on Instagram: @just_be_ewe.

About Women in Ranching

MAKE A GIFT
Posted in Agriculture, Forest and Range, Women in Ranching 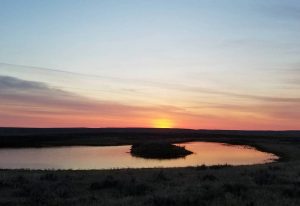 Birds Got no Beef with Burger 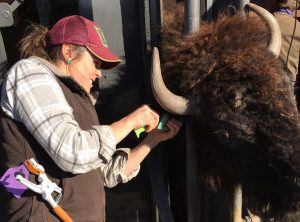