Now available as a monthly email for members only

Become a Member - Get the Digest 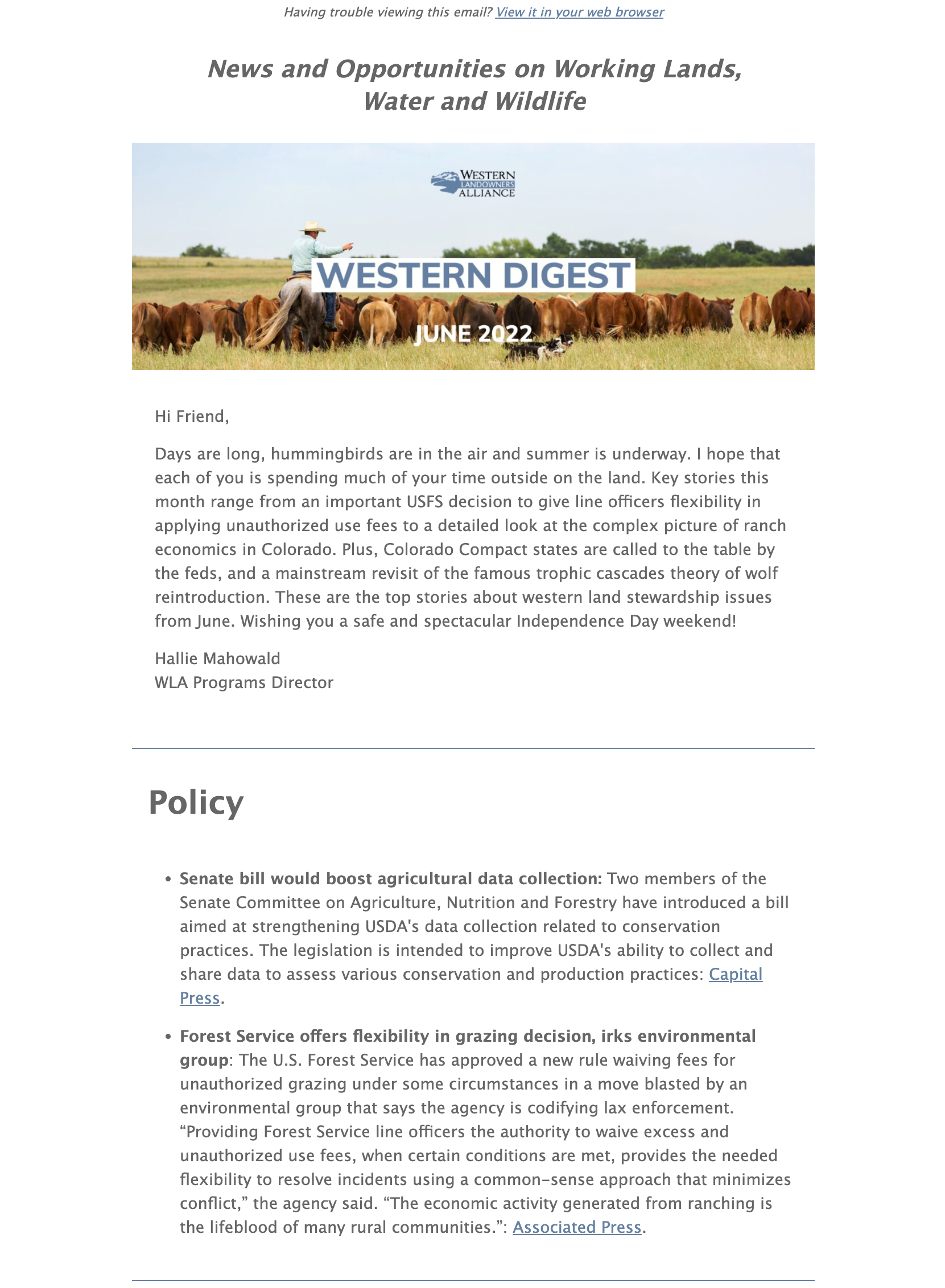 Get the most important news for landowners from around the West in your inbox.

By most metrics, wolf recovery in the lower 48 is a conservation success story. But not everyone sees it that way. The first season of a new podcast from Montana State University Extension and the Western Landowners Alliance digs into why, and what that means for the future of wolves, and working lands, in the Western U.S.

The prevailing belief among local livestock producers and Crook County Wolf Committee leadership is that wolves are likely in the area.

But due to a lack of data, which is attributed to insufficient reporting of wolf sightings, the county is still not listed by Oregon Department of Fish and Wildlife (ODFW) as a “area of known wolf activity.”

Does this fisherman have the right to be in this billionaire’s backyard?

In 2018, Hill, 81, a retired nuclear weapons scientist, filed a lawsuit asking the state to clarify its notoriously muddy stream-access laws vis-à-vis one of his favorite trout fishing grounds. To the ire of many landowners, who see it as a threat not only to their privacy but to their property values, that suit has been progressing through the state court system like a slow-moving missile.

A victory against the landowners would “have staggering implications for settled agreements governing the use of our state’s rivers,” according to a statement from the office of Colorado’s attorney general, Phil Weiser.

How many wolves should there be in Colorado?

The Colorado Parks and Wildlife Department has roughly 18 months to reintroduce gray wolves on lands west of the Continental Divide. As the agency puts together a reintroduction plan, the question of just how many wolves Colorado can realistically support is now the center of an ongoing debate. …

In June, the Western Landowners Alliance and the North Park Stockgrowers Association organized a meeting in Walden, Colorado, where they discussed some of challenges of living with wolves. The event brought together more than 40 ranchers from Northern Colorado with decades of experience tending their lands west of the divide.

Oregon gets funds to help producers deal with wolves

A federal grant will soon be available to help farmers and ranchers combat wolves in Oregon.

$100,000 will be spent by the USDA to help solve the problem in non-lethal ways like range riding, carcass management, and safer fencing options. Leaders at the Western Landowners Alliance say preventing livestock deaths are sometimes difficult because wolves can be quite intelligent.

They are hoping technology, like surveillance cameras, could track wolf movement and notify ranchers of danger in real-time.

“I’d Have to Bury You Out Here.” The New Mexico Stream Access Battle Is Far From Over

“What’s happened in this debate too often is that proponents of opening streams have cast the issue as greedy landowners trying to exclude the public and privatize streams for their own enjoyment, their own profit,” she says. “By saying that, you create an enemy to rally people around.”

Allison explains that this argument also overlooks the critical role that landowners play as environmental stewards of these streams. She says that some of these individuals bought land specifically to invest in conservation, and together they’ve made significant investments to restore the waterways that flow through their property.