PORTLAND, Ore., August 27, 2015 – Agriculture Secretary Tom Vilsack today announced a four-year strategy that will invest approximately $211 million through 2018 in conservation efforts to benefit the greater sage grouse. The strategy, known as Sage Grouse Initiative 2.0, will build on successful public and private conservation efforts made since 2010 to improve sage grouse habitat. The new plan will provide additional assistance for ranchers to make conservation improvements to their land, which mutually benefits the iconic bird and agricultural operations in 11 Western states.

“The Sage Grouse Initiative has proven itself as a model for how wildlife and agriculture can coexist and thrive in harmony, and that is why we are announcing steps today that will expand this important initiative throughout the life of the 2014 Farm Bill,” said Vilsack. “I applaud America’s ranchers for their initiative in improving habitats and outcomes for sage grouse and other wildlife, and for their recognition that these efforts are also good for cattle, good for ranching operations, and good for America’s rural economy.”

Since its launch in 2010, public and private partners engaged in the Sage Grouse Initiative (SGI) have conserved 4.4 million acres, an area twice the size of Yellowstone National Park, using voluntary and incentive-based approaches for conservation. Between 2010 and 2014, USDA’s Natural Resources Conservation Service (NRCS) invested $296.5 million into SGI, which partners matched with an additional $198 million. By the end of 2018 with implementation of the SGI 2.0 strategy, NRCS and partners will invest approximately $760 million and conserve 8 million acres, an area more than seven times the size of the Great Salt Lake.

The wildfires devastating Western communities also impact habitat for wildlife like sage grouse. Under the SGI 2.0 strategy, NRCS will focus on reducing the threat of wildfire and spread of invasive grasses after fires to restore wildlife habitat and quality livestock forage. The strategy will also focus on removing encroaching conifers, protecting rangeland from exurban development and cultivation, protecting mesic habitats like wet meadows, and reducing fence collisions.

While in Oregon, Vilsack will meet with conservation partners, ranchers, and government officials who have worked through SGI to conserve sage grouse habitat. Oregon has seen success in sage grouse habitat conservation, especially through the targeted removal of conifer trees that invade sagebrush habitat. Through SGI, NRCS has helped Oregon ranchers address more than two-thirds of the conifer problem on private lands in the state’s priority areas, and with SGI 2.0, anticipates 95 percent removal on priority private lands by 2018.

“The Sage Grouse Initiative is making a difference because private landowners voluntarily work with us to produce results on the ground,” Vilsack said. “The decisions Western ranchers and other private landowners make every day about what to do on their land will continue to have a critical impact on sage grouse.”

SGI conservation practices are targeted to ensure maximum benefits in the areas where they are implemented, and this focus will continue in SGI 2.0. During the past five years, SGI has increased conservation easements 18-fold and strategically located them in priority landscapes that contain the majority of the birds. These easements not only protect important lands but help stitch together the broader landscape, connecting public and private lands into a footprint of healthy habitats.

These voluntary conservation practices work. Earlier this year, the U.S. Fish and Wildlife Service (FWS) determined the Bi-State sage-grouse, a subpopulation of the greater sage-grouse along the California-Nevada border, did not require listing because of the conservation efforts of NRCS and partners proactively working to conserve the species. This success is seen nationwide, evidenced in the recent decisions not to list the Arctic grayling in Montana, the proposed delisting of the black bear in Louisiana, and the recent delisting of the Oregon chub.

The deteriorating health of the sagebrush habitat and the greater sage-grouse has sparked an unprecedented, collaborative federal-state partnership. This comprehensive approach includes strong conservation plans for state and private lands, strong federal conservation plans, and an effective strategy to reduce rangeland fire risk. 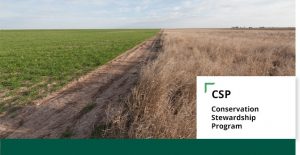 Changes to Conservation Stewardship Program you should know about 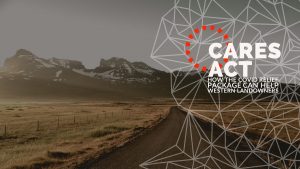 How the COVID-19 relief package can help western landowners

The Coronavirus Aid, Relief, and Economic Security (CARES) Act includes specific provisions for critical sectors of the economy, with particular assistance for agricultural businesses and land managers. In the following, we lay out these provisions and, where appropriate, how to avail yourself of them.
Read more