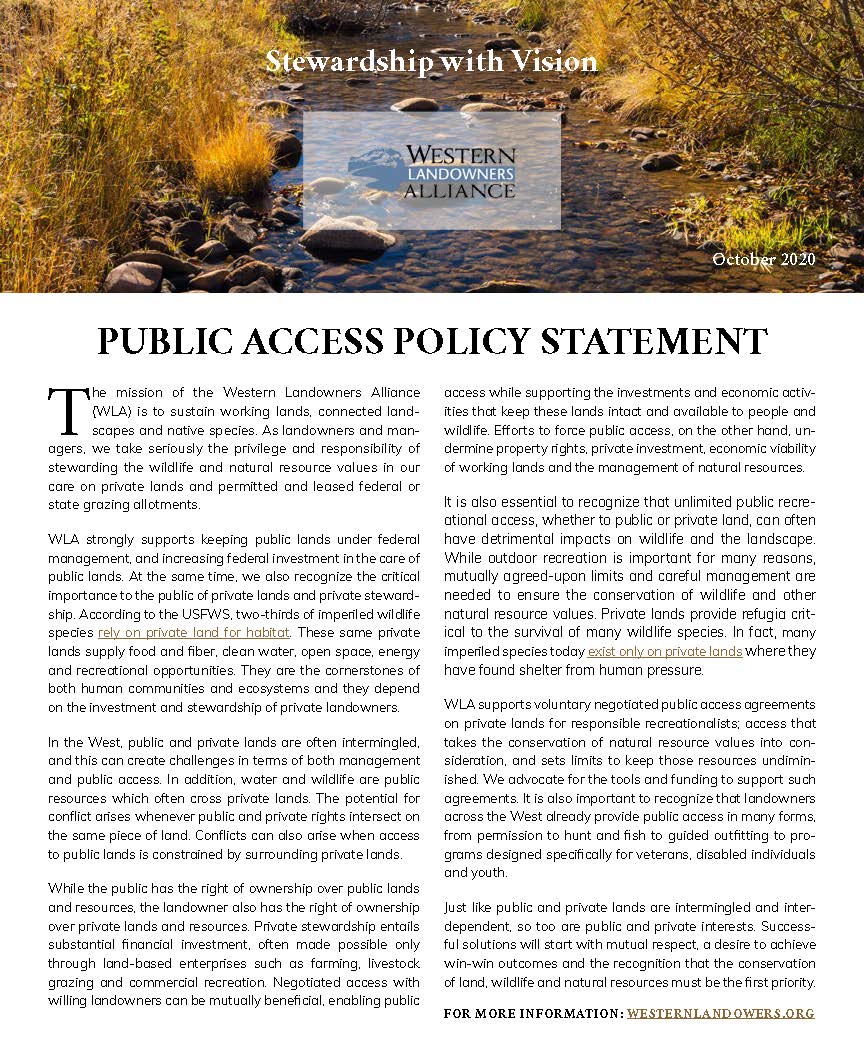 WLA strongly supports keeping public lands under federal management, and increasing federal investment in the care of public lands. At the same time, we also recognize the critical importance to the public of private lands and private stewardship. Just like public and private lands are intermingled and inter-dependent, so too are public and private interests. Successful solutions will start with mutual respect, a desire to achieve win-win outcomes and the recognition that the conservation of land, wildlife and natural resources must be the first priority.

Sign up to Protect Private Property and Healthy Ecosystems

By joining the Western Landowners Alliance, you are adding your voice to those who seek responsible solutions to public access-private property conflicts that put the conservation of land, wildlife, and natural resources first.

In the West, public and private lands are often intermingled, and this can create challenges in terms of both management and public access. In addition, water and wildlife are public resources which often cross private lands. The potential for conflict arises whenever public and private rights intersect on the same piece of land. Conflicts can also arise when access to public lands is constrained by surrounding private lands.

The most significant casualty in the battle over public access to private lands ends up being the fish and wildlife that depend on private lands and landowner investments. According to the USFWS, two-thirds of imperiled wildlife species rely on private land for habitat.

We also have to recognize that conservation and recreation are not one and the same. The question needs to be asked: what are recreationalists personally giving back relative to the impacts we are generating?

WLA supports voluntary negotiated public access agreements on private lands for responsible recreationalists; access that takes the conservation of natural resource values into con- sideration, and sets limits to keep those resources undiminished. We advocate for the tools and funding to support such agreements. It is also important to recognize that landowners across the West already provide public access in many forms, from permission to hunt and fish to guided outfitting to pro- grams designed specifically for veterans, disabled individuals and youth.

Just like public and private lands are intermingled and inter- dependent, so too are public and private interests. Successful solutions will start with mutual respect, a desire to achieve win-win outcomes and the recognition that the conservation of land, wildlife and natural resources must be the first priority.

On March 1st, 2022, the New Mexico Supreme Court held that the state's stream certification rule is unconstitutional. The rule was intended to provide clarification for both landowners, the public and law enforcement officials as to rights of public access on specific stream segments. Without such clarification, disputes and conflicts will undoubtedly continue. WLA is disappointed in this initial ruling. It is, however, just one aspect of a long and complex debate over public and private property rights not just in New Mexico but across the country. We are waiting to learn more in the detailed opinion yet to be released.

What is not being talked about, however, is the thing that matters most: the well-being of streams and all the fish and wildlife that depend on them. Outdoor recreation and time in the outdoors is vitally important to many Americans, but recreation should not be confused with conservation. In fact, outdoor recreation has become a $700 billion dollar industry generating industrial-scale impacts on fish and wildlife. As a result of development, recreation and intensive agriculture, we continue to lose wildlife habitat and wildlife species at an alarming rate, yet people continue to demand more and more access to places where wildlife have traditionally sought refuge, including on private land.

Many landowners, including those directly involved in this particular case, have played a leadership role in restoring streams and fisheries, and in conserving essential lands and habitats. Partnering with these landowners and ensuring their investments in sustaining fish and wildlife populations are protected should be the highest priorities. WLA will continue to fight to defend the rights of landowners to conserve and steward the land, water and wildlife resources in their care.