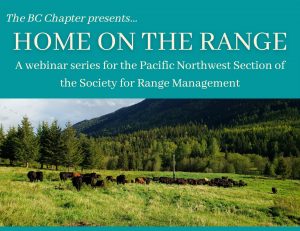 Once again, BC Chapter offers a webinar series showcasing projects and case studies of young range management professionals and students in the PNW. Each 30 minute webinar will feature a 15 minute presentation followed by questions and discussions.

Rangelands in the intermountain West have faced multiple types of disturbance such as  wildfires, overgrazing and an increase in exotic annual grass invasions, which degrade the plant  cover. An alternative to reestablish the native plant cover is a restoration program. However, exotic annual grasses have currently changed many of the successional processes and any restoration  project require a different approach to be successful. Two tools that are gaining a lot of interest are the utilization of biochar and arbuscular mycorrhizal fungi (AMF). However, a lack of knowledge regarding AMF inoculation makes this approach complicated, particularly its effect on the invasive species. We tested 3 different sources of AMF inoculum (commercial AMF inoculum, AMF from  an early seral ecosystem, and AMF from a late seral ecosystem) with and without addition of  biochar on its ability to colonize and influence growth on one late seral species (Pseudoroegneria  spicata), and two early seral species (Taeniatherum caput-medusae, and Ventenata dubia). We expected that colonization and biomass production of each different seral species will be better on their respective AMF seral source. Ignoring biochar treatments, colonization of P spicata and V.  dubia followed our original hypothesis: P. spicata colonization was greater on late seral soils,  while for V. dubia was greater in early seral soils. In general, both V. dubia and T. caput-medusae were the species that produced more biomass along treatments. Biomass production was not significantly affected by colonization or biochar applications. These differential results might  indicate that each different species is adapted to different mycorrhizal communities conditioned  by the seral status and possibly hidden nutrient gains.