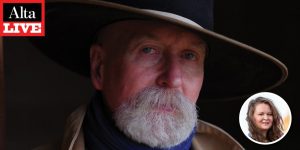 Kent Reeves is part of a movement to fight climate change by repairing California’s native grasslands, provided he can rope his fellow ranchers and their cattle into the plan. Reeves and Alta Journal contributor Meredith Lawrence join Alta Live for a look at the cowboys trying to sustain the state.

Kent Reeves works as a wildlife-range ecologist, a packer, and a cowboy in California. He rode bareback broncs in college, cowboyed and started colts in New Mexico, and started guiding people in the Sierra Nevada as a mule and horse packer in 1983. Besides his education from the backside of a horse, Reeves has a graduate degree in natural resources and what some people think is a real job managing his own business, the Whole Picture. Since 2015, he has organized and moderated the Stockmanship Symposium for the Society for Range Management Annual Meeting, and he guides people in California on listening to the land and one another through the Rancher to Rancher network, among other conservation work. Reeves continues to pack mules and guide in the Sierra Nevada.

Meredith Lawrence is an award-winning writer and photographer. An Oregon native, she started her career in local news in Oregon and Washington and has worked as a videographer, a producer, a photographer, and a magazine writer. She holds an MA from Columbia Journalism School and lives in Brooklyn, New York.